Last week I released a blog that discussed what a chiropractic adjustment does from a biomechanical stand point. In this weeks post I will attempt to further explain what the adjustment does, but this time from a neurological stand point. The key word in the last sentence is attempt, because neuroanatomy is much more complex than a one-page blog, but I hope to paraphrase what it is we do neurologically. Let’s start by breaking down what our nervous system is… 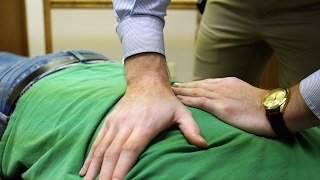 All day long our brain (CNS) is processing information from these nerve receptors (PNS) in our joints, muscles, ligaments, discs, etc.

As I stated in last week’s post, it is imperative that our joints move correctly to enable proper functional movement patterns and to avoid pain and injuries. Also, if our joints are not moving correctly, the nerve receptors will desensitize and eventually send a pain signal to the brain known as nociception. However, if our joints are moving correctly, the nerve receptors will sense this and send what is known as proprioceptive input to the brain. Proprioceptive input notifies the brain where that joint is at in space.

Therefore, the adjustment is designed to take place in these desensitized or restricted joints and override the pain signal by stimulating proprioceptive input. Think about the last time you hit your head. I bet the first thing you did was rub the spot you hit, right? If it seemed to make it feel better its because you were overriding the pain signal by stimulating the receptors that give the brain proprioceptive feedback. This scenario helps to explain the neurological reason why the adjustment makes you feel better, but on a larger scale. When our brain is bombarded with new proprioceptive input it takes precedent over the pain signal.

As a mentor of mine put it, the adjustment opens a neurological window when pain is gone and it allows time for proper movement to take place. With each adjustment and each exercise performed, the hope is to create a larger time frame that this “window” is opened. When the window stays open for an extended period of time this is when your condition has been treated successfully.

Why should I go see a chiropractor for my back/neck pain? First off, there is no way I can condense the reasons why you should go see...